The Battle-Friedman House was constructed in 1835 by Alfred Battle, a wealthy North Carolina native. Located on Greensboro Avenue, known at the time as "Millionaire's Avenue," the Battle family was not as extravagant and flashy as their neighbors the Jemisons and Drishes. In fact, Alfred Battle's wife did not care for guests and especially hated Amelia Gayle Gorgas.

In 1875, the house was purchased by Bernard Friedman, a self-made immigrant from Hungary. He was much more hospitable than the Battles and opened up the pocket doors that separated the two parlor rooms from the entrance-way in order to allow for dancing and socializing. 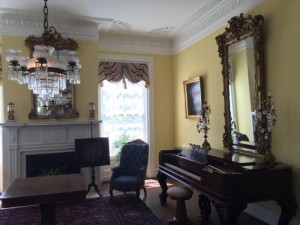 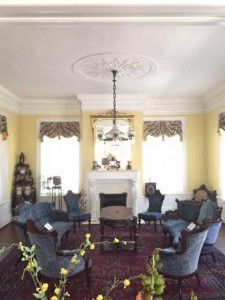 The house has many interesting features. Perhaps the most interesting is the height of most of the objects within the house. The members of the Battle family and Bernard Friedman were not particularly tall (none of them were taller than 5'5"), so the doorknobs, furniture, and stair rails are very low. This house is also home to one of the first 88-key (full keyboard) pianos in America.

The house remained in the Friedman family until 1965 (Hugo Friedman played a key role in the hiring of Coach Bryant). Upon Hugo's death, the house was willed to the Tuscaloosa County Preservation Society. The Society still owns and operates the house today. The tour guides are very knowledgable about the house as well as the community of Millionaire's Avenue, an often unkown, yet very interesting, community.