Review of Tuscaloosa Museum of Art

The first museum I visited was the Tuscaloosa Museum of Art just off of Jack Warner Parkway. It was a very nice art museum with different kinds of art throughout American history. I personally just observed the Early America and Revolutionary American sections since that is what our class focuses on. The two artworks that captured my attention the most was ‘An Allegory of America, circa 1575’, by Pauwels Franck, and ‘Washington Taking the Salute at Trenton’, by John Faed. Both works are completely relevant to our class just about 300 apart from each other in both the content and when the works were actually painted.

‘An Allegory of America, circa 1575’ is the first painting attached on the bottom and was the first painting I actually stopped at and observed genuinely. Painted in 1575, it portrays a negative view on Native Americans. As you can see in the back left of the painting the Natives are eating people, unorganized, and look barbaric or as early Spanish would say “uncivilized”. In the right corner you can see a Spanish army well put together, portrayed as civilized, while the Native soldiers are very disorganized. The Natives are also coming out of a dark rock, looking very evil, while the Spanish soldiers are in the sunlight. This painting was very interesting to me because it is physical proof of how the Spanish people viewed Native Americans back in the sixteenth century. Even though the painting does have a negative message, my review of the painting is very good because the artwork does such an incredible job of getting across the message it delivers to the audience it was intended for at the time.

The second painting I took a picture of, ‘Washington Taking the Salute at Trenton’, was intriguing to me because of the way painter John Faed portrays George Washington and how effectively he does it. The use of colors and size comparison makes Washington look very heroic. His white horse and vibrant body stands out compared to the shadows and darkness or “evil” in the background. This artwork does such a tremendous job of showing that Washington is a great leader and the United States is lucky to have had him as our nations first president. Even though it was painted in the mid-nineteenth century, it shows what an impact Washington had on our country and the way people during this time viewed him. My review of this painting was much more positive since obviously I agree that Washington was a great leader and first president. Overall I have good things to say about both of these artworks and the museum itself and would definitely recommend it to people interested in artwork produced during early America. 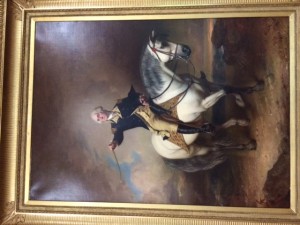 Ernest- “My name is Ernest and I support James Monroe in the 1816 election. James Monroe supports states rights and Democratic-Republican women support their troops just like in the French Revolution war. For Christ sakes, look at this Federalist woman she cant even support her own child. The child doesn’t even have a jacket on. She doesn’t care to knit for her child. And on top of that, it’s snowing outside!!!!!! Well it’s not snowing anymore…….(Zagarri 100).”

Ernest- “I want my daughter to grow up a supporter of her beautiful country. I want her to understand the ‘ideals of liberty, equality, and fraternity’ (Zagarri105). Unlike this fat Federalist who doesn’t do anything for our wonderful country. She is just a ‘whore of Great Britain’ and might as well burn our nations flag (Zagarri 112).”

Mary – “Democratic-Republican women are strong and sophisticated. We Democratic-Republican women support our men, and are able to take care of our homes while our men are away fighting for our freedom. We are the women you want your daughters to be. Admit that you’re better, and don’t stoop down to the same level as those Federalist pigs such as Rufus King. Vote for James Monroe and love your women.”

Warning lady - “No babies were harmed in the making of this film.”