Round house was constructed in the early 1860s. The purpose of the building was to guard the Alabama Corps of Cadets. While the cadets were on duty the little round house served them as a shelter from inclement weather. The house was also used as a place to host the University Drum Corps, which consisted of rented slaves. The little round house was one of the very few buildings on campus which survived the union forces distortion. It even survived the fire of 1865 when the whole campus was caught on flame. In 1871 this building became the office of the University surgeon, Later this building was used as a residence for all students even the ones who were not in the military. Later in 1888 the little round house became a storage where all university records were kept. At the end of 20th century the building became a memorial for all honor societies of the university. 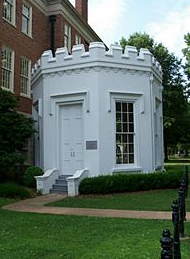