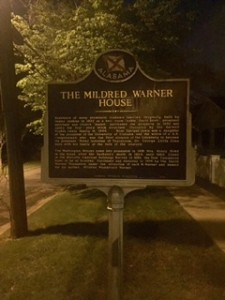 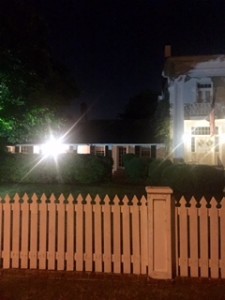 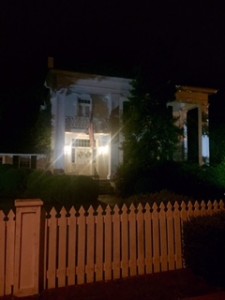 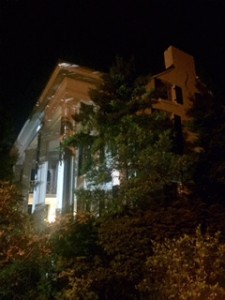 Another piece of American history prior to 1877 I was able to visit was the Mildred Warner House. This was the residence of many prominent Alabama families. The house was originally built by James Jenkins in 1822 as a two-room cabin. David Scott, a prominent merchant and church leader, added on to the house in 1832. From there the Burwell Boykin Lewis family occupied the residence from 1886. The president of the University of Alabama’s daughter and widow of a U.S. Congressman lived in the house until the turn of the century. Dr. George Little lived in the house with his family for decades before the Washington Moodys purchased the house in 1919. The house was listed in the Historic American Buildings survey in 1934, the first Tuscaloosa home to earn this distinction. Most recently, the David Warner Foundation was bought and renovated under the direction of Jack W. Warner and named for his mother, Mildred Westervelt Warner.

This house is vital to American and local history because of the many prominent inhabitants of the home over the centuries. It is interesting to see the many different hands that this house changed hands through. The house is in great condition and still stands in the center of the Historic District in downtown Tuscaloosa. The relevance to the course material is an insight to the architectural styles and influences during the time period. Many elements of the house are preserved so that visitors are able to observe today. I thought that the house was very momentous and is interestingly nested among other later homes in the suburban area. This landmark is able to blend in with the surrounding houses but offers a much greater piece of history to Tuscaloosa, Alabama.