One of the bigger exhibits in the interpretive center/museum in Moundville is seen as soon as you walk in the front door of the museum.  The exhibit is called “The Procession: Splendor at Ancient Moundville.”  This is an exhibit of a young elite woman being carried around by four noble warriors with the help of a greeter and a flute player. These young elite women who were carried around were almost always the daughter of a ruler in the community, because in the Southeastern Native American way of life, descent was very important. Around the elite women being carried around there would be gifts including copper, bowls, exotic feathers, squash, woven goods, among others.  These elite brides were generally being carried to see their husband, who is generally the heir of a ruler in Moundville.

Another exhibit from the museum that was very interesting was the pottery made in Moundville that was on display. The exhibit explained the history of pottery and how it was made in that time period. Pottery was first introduced over 4,000 years ago in North America in parts of the Southeast. Pottery was originally created as plain bowls with thick walls. As people became more familiar with pottery, it became more complex and advanced. In Moundville, pottery was created from clay, with the addition of mussel shell. The pottery in Moundville was more sophisticated and included different shaped pottery bowls with increasingly more difficult designs. Pottery was also included on the exhibit with the elite woman being carried around.  Among the gifts that were on the chair with the woman were bowls of pottery. 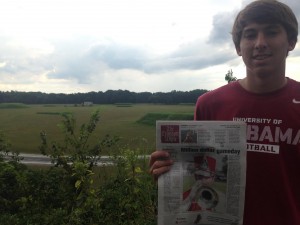